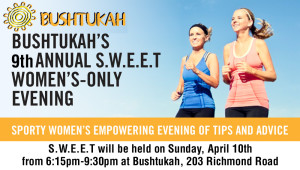 A month or so ago Mike Caldwell, Mad Trapper race director, asked if I would be willing to host a table for trail running and Madtrapper events at the annual Bushtukah “S.W.E.E.T.” night.  This is a women’s evening hosted at Bushtukah’s Richmond Rd. store and its title stands for “Sporty Women’s Empowering Evening of Tips and Advice”.  Mike asked me to step in since all participants, even those working at the tables, had to be women.  Imagine, if you will, an all female race expo that includes a fashion show, unbelievable prizes and inspiring guest speakers.  Also imagine the incredible energy in a room full of 500+ women who want to take on physical challenges and live life to the fullest.

I will admit to being a little proud of the fact that Mike asked me to represent trail running and the Mad Trapper.  I am still fairly new to trail running and I am certainly not at the front of the pack… or the middle for that matter!  But he felt that I could represent what his events are about – getting out there, challenging yourself, enjoying the outdoors and the social nature of trail runners.

To prepare for the evening I did some research as I had never attended a S.W.E.E.T. night before.  In the process of learning about it I discovered that Bushtukah was also looking for S.W.E.E.T. Ambassadors.  Five women of any age and fitness level would be chosen based on their applications to help promote achieving personal fitness goals.  Applicants were required to have a “personal first” planned for 2016, volunteer at a minimum of one event during the year and be active on social media, giving goal updates and sharing with other women stories of fitness.  Bushtukah in return would offer some very generous discounts and gift certificates as well as a Sugoi vest.  Needless to say I didn’t hesitate to apply and was very excited to find out that I had been chosen.  As for what my first will be, well a little more on that later.

That excitement increased even more once I was at the S.W.E.E.T. event on Sunday night.  To be truthful I was not prepared for the energy and enthusiasm of all the women attending.  To enter, tickets had to be pre-purchased with all proceeds –  $3,070! – going to the Ottawa School Breakfast Program.  Despite already having tickets, women still lined up outside 45 minutes before the event started!

I had a great time talking with so many different women about trail running and promoting the Madtrapper Power in Pink Trail Run that will be held this summer.  There were many women who voiced their desire to trail run but were nervous about starting – exactly how I felt not that long ago.  But if any event was going to convince you to try something new, the S.W.E.E.T. night  was it.

Once everyone had time to wander and look at all the tables, we all grabbed a seat and were treated to two guest speakers.  Sharon Donnelly spoke about the need for “me”, and the importance of giving yourself permission to focus on yourself.  Sue Halloway talked about the importance of encouraging girls to participate in sport and to recognize that how girls approach new challenges is in fact very different from boys.  Let’s just say we women spend a lot of time worrying about being accepted and wondering if we have the skills to meet the goals, and these characteristics start at a young age.

Between speakers, myself and fellow Ambassadors were introduced to the crowd and some incredible draw prizes were awarded.  To give an idea of the scope of prizing, everything from full running outfits to free shoes were handed out.  The final prize of the night?  A bike!  If I had won that I might have actually been willing to take up biking!

The whole evening was inspiring and energizing.  I sometimes think that as women we unleash our insecurities by comparing ourselves to each other and in turn sometimes being critical of other women.  But there is so much power and joy that comes from supporting one another and cheering others on, no matter their goals.  When I was running Around the Bay this year there was a women in front of me who had a handwritten bib on her back stating she had just had a baby 5 months ago.  My first thought was, “How awesome is that?”  But the second line written rubbed me the wrong way.  It asked, “What’s your excuse?”  I felt like that question, though I am sure meant to be inspirational, just once again put women against women in a competition to see who could be the better female.  I wasn’t a runner before children so I can’t say for sure, but I don’t think I would have been running 30k only months after having either of my children.  I am truly in awe of someone who can, but I felt like that bib had a critical edge to it, a, “Well if I can do it you should be doing it too and if you can’t, whats wrong with you?” feel to it.  Let’s just stop doing that.  Let’s celebrate our accomplishments and appreciate that the accomplishments are different for everyone.  Hey, if your accomplishment was managing to get your teeth brushed in between nursing a fussy baby and attempting to grab a nap after a sleepless night, that is awesome and you have my greatest admiration.  I love the fact that the S.W.E.E.T. night embraced all of us, whether regular fitness enthusiasts or women who are just on the first steps of something new to improve their well-being and happiness.  I hope that as an ambassador I can offer up a little bit of that power of support in 2016.

And as for that first I am going to do this year… Run for the Toad 50k, here I come!